The CHEERS Development Plan for Cleveland's Eastern Lakefront
​    Opportunities for Birds and Birders
Join the Kirtland Bird Club as we hear about exciting future options for Cleveland's eastern lakefront! 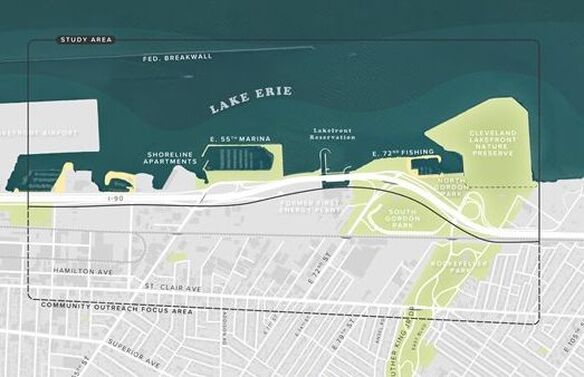 Planners from Cleveland Metroparks and Port of Cleveland will share several exciting possibilities for this area with our group. They are two of five partners (Cleveland Metroparks, the Ohio Departments of Natural Resources and Transportation, City of Cleveland, and Port of Cleveland) in a year-long planning study called CHEERS (the Cleveland Harbor Eastern Embayment Resilience Study).
​
The CHEERS area includes an Important Bird Area: Cleveland Lakefront Nature Preserve (CLNP).  Birders have recorded 282 species of birds at CLNP, and this rivals world-famous Magee Marsh, farther west on Lake Erie, where 288 species have been seen.

The CHEERS area also includes the land and water stretching west to Burke Lakefront Airport . Birders regularly search this stretch of the lake for aquatic species and this is the area where exciting possibilities - for things like wetlands - are being discussed.

During the presentation on Wednesday, February 3rd the birding community will have an opportunity to provide input to planners - much as they did at the start of the 21st century when they convinced planners to turn a landfill into the Cleveland Lakefront Nature Preserve.
Click HERE​ if you would like to join us for this talk but are not already a member of the Kirtland Bird Club
The story of Cleveland Lakefront Nature Preserve goes back to 1979, when a Confined Disposal Facility called Dike 14 was built along the southern edge of Lake Erie. It was built to house dredging from the nearby Cuyahoga River and it gradually filled up over the next 20 years. During that time vegetation appeared, and migratory birds and other wildlife were attracted to the site. Around the start of the 21st century Kirtland Bird Club and other local birding and nature groups focused attention on the importance of Dike 14 to migratory birds and the birding community and urged that it be preserved as a nature site. In 2012 Dike 14 was renamed and opened to the public as Cleveland Lakefront Nature Preserve.

Click here for past speaker programs and video links to those programs.

​Click here for past Bird Identification programs and video links to those programs.

Black birder Christian Cooper’s cell phone video showing a white woman calling 911 to report he was threatening her and her dog (which was not true) went viral – and it ignited a spate of discussions, articles, videos, and news items about how systemic racism plays out in birding.

Thanks to a black birder member of the KBC who had asked that we show and discuss Cooper’s video at our previous meeting, our club has begun to address how systemic racism impacts the experience of birding for people of color - and how we can respond.

We have put some of the video presentations, articles, and facebook posts that KBC members have viewed during this time in our website archive.  Become informed by them and join us in our endeavor.
Making the News:

- About Native Plants
- Where did the name KIRTLAND Bird Club come from?
- Birding While Black Archive
​      - For New Birders
MONTHLY MEETINGS
Kirtland Bird Club meets on the first Wednesday of each month, September through June at 7:30 p.m.  ​Each meeting includes announcements, some club business, and a speaker program.  Meetings are free and all are welcome!

Because of COVID19 we are meeting via Zoom instead of at our usual location, The Cleveland Museum of Natural History.  Our field trips are also on hold.   We look forward to resuming in person gatherings in the future!
​QUICK LINKS
*  CONTACT US   *   BECOME A MEMBER   *   MEMBER PHOTO GALLERY   *
*  LINKS TO OTHER OHIO BIRDING ORGANIZATIONS   *   OHIO BIRDS LISTSERV   *
*  NEW BIRDER RESOURCES  *  FIND US ON FACEBOOK   *